It is written: ‘As surely as I live,’ says the Lord, ‘every knee will bow before me; every tongue will acknowledge God.’
Romans 14:11
DailyVerses.net 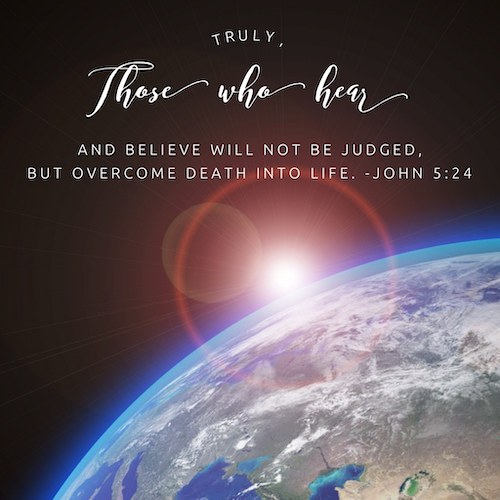 Very truly I tell you, whoever hears my word and believes him who sent me has eternal life and will not be judged but has crossed over from death to life. -John 5:24 (NIV)

The hotly anticipated 2019 Marvel movie Avengers: Endgame concludes an epic, convergent story arc of over 20 interconnected movies that have come before it. In 2018’s Avengers: Infinity War, the seemingly unbeatable villain wiped out half of all life in the universe—with the snap of his fingers. In Endgame, justice will be served by fictional heroes like Thor (Norse god of thunder), Captain America, Iron Man, the Incredible Hulk, and others, likely at a bittersweet cost.

There’s only one God, ma’am, and I’m pretty sure He doesn’t dress like that. -Captain America

As engaging as that sci-fi/fantasy story is, the real world’s endgame story is one we observe every Easter: the heartrending but necessary crucifixion of Jesus, when all seemed lost…to His triumphant resurrection, saving a world condemned to the grave. This is the amazing conclusion—and God’s loving, sacrificial answer—to man’s neverending rebellion against Him.

From the beginning of man’s relationship with God, he decided to stray from God’s definition of good and evil, choosing to define it for himself. Today, that continues, with morals and ethics that are seemingly controlled by whomever is the most offended.

But speaking and living by a set, solid standard and truth often is met with friction, offense, or even fatal opposition—just look at Jesus’ life. As believers, we follow in His difficult footsteps, in a world where seemingly anything goes. But we can continue to walk by faith, and not by sight (2 Cor. 5:7). Why?

Spoiler alert: As believers, we know how the story will end. We are not doomed to the grave, but will dwell in the house of the Lord when we depart this world. I’m so grateful this story ending is the one I can actually live out!